Today, Tarek defended his PhD thesis: Hydrologic Performance of Sustainable Urban Drainage Systems in Cold Maritime Climates. As a co-supervisor*, I was very proud to listen to his presentation and scientific discussion with the two opponents Dr. Tone Merete Muthanna from NTNU in Norway and Dr. Ryan Winston from Ohio State University in the US. Among many interesting topics, Tone discussed the role of swales for flow control in cold climates and Ryan discussed aspects of water quality control with infiltration systems. Tarek was, as usual, well prepared and had clear thoughts and answers to all questions, including improvements of future field studies, modelling, and statistical analyses, which I find important for his future career. Congratulations, Tarek, to a very well deserved PhD and a great presentation and defence!

In this article, two concepts in urban storm water management, the Three Point Approach (3PA) and Sustainable Urban Drainage System (SUDS), are presented and discussed. While SUDS is well known and has been used for many years, the 3PA is new and not so well documented. SUDS could be called a Best Management Practice (BMP), while 3PA is a tool for discussing urban storm water management.

According to IPCC (2007) it is “very likely that … heavy precipitation events will become more frequent” in the future (during the 21th century) because of climate change. The expected life time of a conventional urban drainage system is 50-100 years (Winther, 2011) and consequently it is important to consider climate change effects in all urban storm management, even though the precise effect are uncertain. The uncertainty calls for a more resilient design (Godschalk, D. R., 2003).

Frantini et al. (2012) have developed the Three Point Approach (3PA), which is a tool for urban flood risk management. The idea is to give managers and operators a tool for discussion and reflection when planning a new drainage system or redesigning an old system. The three points are presented as follows:

Urban drainage systems are built to transport waste water from households and industries to treatment plants, to drain and to prevent cities from being flooded. But, there are three major problems connected to urban drainage: pollution from Combined Sewage Overflow (CSO) and from paving, roofs, etc., high peak flows causing erosion in receiving waters and flooding when the system is overloaded. These problems calls for better design and many authors suggest Sustainable Urban Drainage System (SUDS) as a solution. Poleto (2010) presents the following goals for SUDS:

Another goal with SUDS is to achieve a more resilient urban drainage system, as the SUDS solutions are more flexible than using a conventional pipe system only.

In many cities today, we are spending a lot of money on transportation and treatment of storm water. In combined systems the storm water are often pumped a couple of times before reaching the waste water treatment plant, WWTP. The WWTPs need a huge extra capacity to be able to take care of the water load from heavy rainfall. During the rainfall, treatment processes will run in an inefficient way because of the extra load. When the limit of the WWTP and the sewage system is reached, combined sewage overflows causes pollution in the receiving waters. In separated system the storm water are often led directly to receiving waters, without any treatment. Therefore a separated system is not good enough to solve problems with heavy metals in lakes, etc. According to Berndtsson & Bengtsson (2006a, 2006b, 2007) storm water from urban areas is the highest contributor for heavy metals to smaller rivers. Therefore also storm water needs to be treated, for example in such a storm water treatment facilities as described in Vollertsen et al. (2007).

Many of the suggested techniques above are both treating the water by sorption or degradation of pollutants and delaying the water flow and thereby minimising risk for erosion and flooding. While the permeable pavements only are effective until infiltration capacity is reached, they can be combined with other uses, like being used as a school yard or a parking lot. Infiltration trenches can successfully be combined with many other functions as they are built underground, if the hydraulic capacity of the soil is big enough. But they share one problem with conventional pipe systems; they are not flexible in their design. Green roofs are only effective for smaller rain falls, but they are useful for many other tasks, like energy saving and making solar power more efficient by lowering the temperature in cities/on the building, obtaining noise reduction, isolating buildings, providing richer ecosystems to the cities and helping degradation of air pollutants (Berndtsson 2010). Green roofs have also a big effect in lowering the annual runoff by evapotranspiration (Berndtsson 2010). Different kinds of reservoirs are very effective, but needs big areas for construction. However they can often be combined with other uses, in the same way as permeable areas. Grass areas in parks can be used as storm water reservoir while raining and as a recreational area in sunny days.

One SUDS technique not mentioned in the list above from Poleto (2010) is the synthetic wetlands used for instance in Malmö, Sweden (Stahre, 2006). This technique is very effective, both for flood control, detention and remediation, if the required area are present.

We are facing a climate change, which means that we can expect more extreme weather, including more extreme rain fall. The investments for adaption to more heavy rainfalls are huge. As we would like to develop our cities to more liveable places, we need to cleverly use every penny two times: both for storm water control and for other things such as for recreation, better ecosystems in our cities, energy saving and so on. The Three Point Approach helps us to discuss the different needs in a systematic and holistic way.

One thing that Frantini et al. (2012) do not mention is the importance of taking care of pollution from storm water and sewage system. The focus in Frantini et al. (2012) is on flood risk. I suggest that the third point, day-by-day values, in an extended version of the 3PA also should include also the pollution problem. By discussing pollution as a part of the day-to-day values domain, a more sustainable system would probably be built. A slow runoff is important for both degradation of pollutants and a more controlled outflow to receiving waters. In a combined system a slow runoff would secure better remediation at the treatment plant and fewer sewage overflows.

I have tried to find literature on two other subjects of interest, by searching in online libraries and talking to professors and practitioners in urban storm water planning. I have found little concerning the following questions and I would therefore suggest further research in these areas:

Note that this text was written in December 2012. For instance, I have published a paper on how SUDS affect flooding during extreme events. However, I still find it relevant and hereby publish the text for anyone to read.

I had the great honour to be panellist of the IPCC Grand Seminar arranged today at Lund University by MERGE, BECC and LU Land. I talked about pluvial flooding and how urban areas can be adapted to climate change. With me I bring new ideas on how we can mitigate and adapt to climate change. There are three main points that I want to share from the seminar: 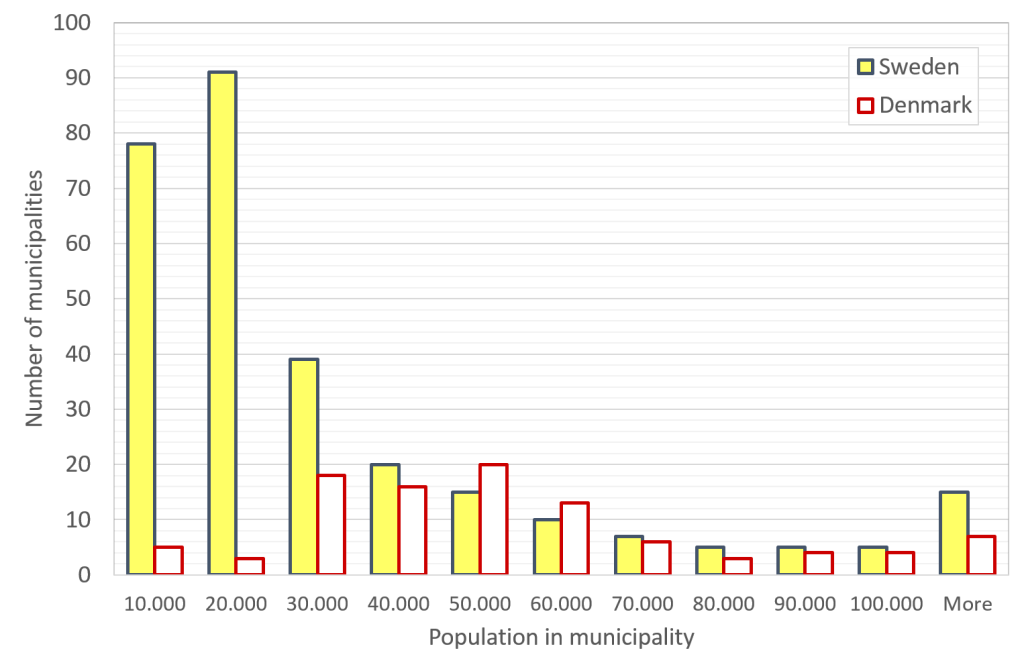 Histogram of population is Swedish and Danish municipalities 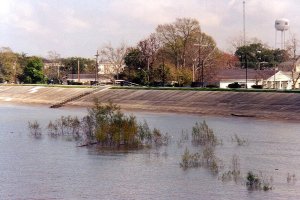 Turn flood dikes perpendicular to the coast, so they point at the sea. Stop to fight against the nature and let nature rule your city. This was the radical message when Anuradha Mathur and Dilip da Cunha visited Malmö in March 2014. The new ideas are now discussed among city planners and architects.

There is a saying that ‘there are two kinds of dikes – the ones that did break down and the ones that will break down in the future’. We design dikes with standards that should lower the risk of failure and we choose a safety level for the dike. But, there is always a limit for the construction. One day the dike will break down or water will overtop it during an extreme storm. The clear message from Mathur and da Cunha is that we should stop to fight the nature with dikes.

Their idea is to turn the dikes or levees around and use them for evacuation when a flood comes. On top of the levee buildings could be constructed. Here is a good and safe place for vulnerable buildings, but also for schools. During a flood – because flood will come, these buildings will be used as evacuation centre.

In the future, we will see higher sea water level due to climate change. Mathur and da Cunha claims that the future sea level rise challenge our understanding of the sea. We need to rethink the urban design fundamentally, as the sea will eat a lot of urban areas along the coast lines. It is not possible to compete with nature.

As the city will be flooded more often with the new turn-around dikes, people will get more aware of the risk and therefore construct the city in a smarter and less risky way. This awareness contributes to flood resilience for the city.

Sometimes people claim that we should ‘construct natural dikes’. This is an engineering approach to nature, says Mathur and da Cunha. The nature works in systems and not in functions. In Norfolk (USA), where they currently are working with the sea level rise problem, the military base is dominating and the military way of thinking is wide-spread: Conquer the fronts. Conquer the land from east to west. This thinking also transfers to the cities fight against the rising sea. Mathur and da Cunha explained how they work with this idea on conquering and that they could see a shift in people’s idea when they gave workshops about it. In their workshop people would learn how natural systems could be used in an effective way for protection. We should work together with nature and see the sea as a friend, they say. It is time to stop fight against nature.